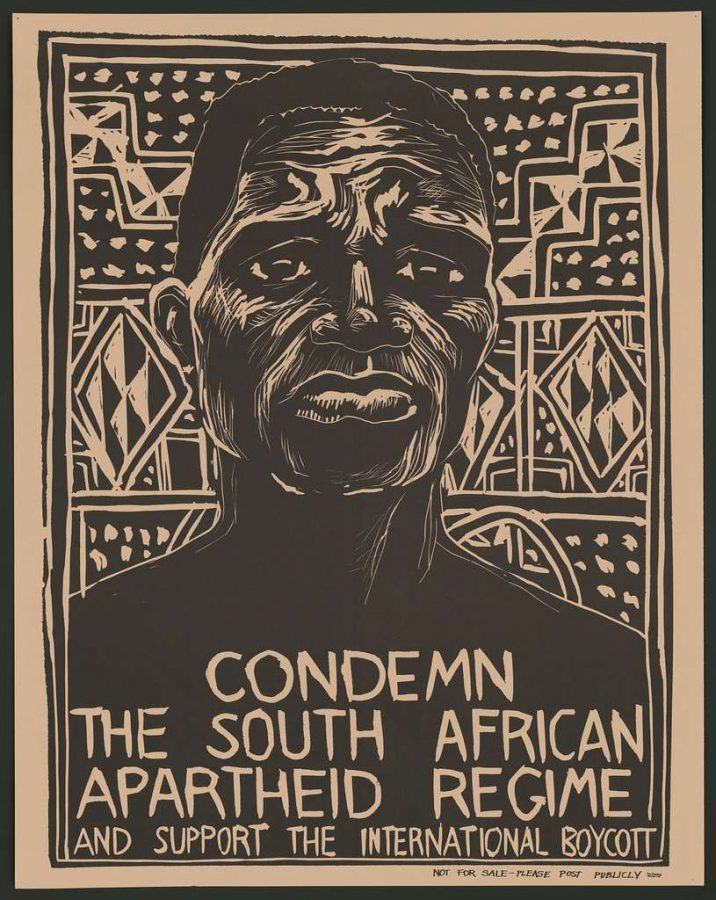 Artist poster from Library of Congress

South African comedian and “Daily Show” host Trevor Noah once said, “There is nothing wrong with seeing color. It’s how you treat color that is important” (NPR). In such a volatile racial and political atmosphere, it is easy to dismiss someone’s race from who they are as a person. Outward racial appearance is a phenotypic indicator that for better and most often worse sorts individuals into different delegations. This “worse” form of sorting was most evident in the South African policy known as “Apartheid.”
“Apartheid” is a bastardized term from the word apartness in Afrikaans. The ugly cousin to America’s era of segregation and Jim Crow, Apartheid ravaged South Africa for almost half a century. “Ending” in 199,1 the scars of the system placed by an all-white government over a majority black country are fresh and painful (History).

Trevor Noah recounts his experience as a mixed-race child in South Africa where his very existence was illegal. “I was born a crime” (NPR). “The government had banned marriages between whites and people of other races, and prohibited sexual relations between black and white South Africans. The Population Registration Act of 1950 provided the basic framework for apartheid by classifying all South Africans by race, including black Africans, Coloured (mixed race) and white. In some cases, the legislation split families; parents could be classified as white, while their children were classified as colored” (History). Black South Africans had their lands seized and redistributed. They were not allowed to live among white people, they were segregated, and they were treated as second class citizens on their own land in their own native country. They were removed from their homes and political processes; their unions weren’t honored or recognized, and through a systematic, politically backed, racially motivated legislation, the majority of black South Africans were plunged into a cycle of poverty and government sanctioned abuse.
One such abuse took place in “1960, at the black township of Sharpesville, [where] the police opened fire on a group of unarmed blacks. The group had arrived at the police station without passes, inviting arrest as an act of resistance. At least 67 blacks were killed and more than 180 wounded. Sharpesville convinced many anti-apartheid leaders that they could not achieve their objectives by peaceful means” (History). After years of peaceful demonstrations many groups militarized. “By 1961, most resistance leaders had been captured and sentenced to long prison terms or executed”(History).
The overutilization of force against unarmed citizens had far surpassed the line of “Peacekeeping” or “Upholding the law” and was the definition of tyranny, attempting to destroy government opposition. The officers responsible for this tragedy were never brought to justice, and it would be another 30 years before apartheid was disassembled. Today tensions run high between black and white South Africans since the pain that was caused and the dignity that was lost is still a vivid memory and an unforgettable aspect that has shaped many black South Africans.
Peace was preached by civil rights leaders such as Martin Luther King Jr. and Nelson Mandela. While this something to strive for, the lives that were destroyed and forever altered should not and will not be forgiven nor forgotten.