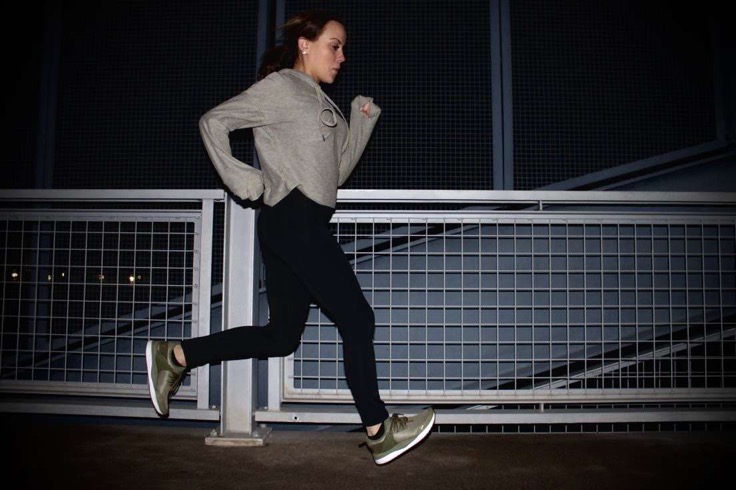 Century College student trains for their next marathon on the campus bridge. (Grace Henke)

Century College student trains for their next marathon on the campus bridge.

R U N to Running?

I’ve been a runner for a little over half a decade. Which seems like a long time until you realize it’s only a fourth of a score. But all the same.

I don’t recall why I started running. I never had an issue with weight to speak of. In fact, I’m fortunate to have the opposite problem. And I’ve never had any interest in participating in marathons. Much like my sex life, running has always been much more of a solitary undertaking.

For me, running is a physical meditation. A mindfulness of motion. It’s a burst of endorphins and adrenaline flowing through your bloodstream and into your cerebral cortex. It’s a spiritual spring. A healthy high without a crushing crash.

Every run, just like every day, differs. Some are better than others. And others are better than some. Of course this is all subjective depending on the objective of the runner. Personally, I don’t care how far I’ve run or how fast I get there. I’ve never been one of those to collect data. I don’t see the point. A good day is a good day. You can’t graph that.

Variables of course exist. Weather being one of them. It’s not always going to be 75 and breezy. Some days are going to be 31 and shitty. Being able to adapt to adaptation is key here. But I don’t go overboard. I own a couple pairs of running shorts and some long underwear. A general rule of thumb is if it’s too cold then don’t go. Same goes for the heat.

The biggest expense to running is the footwear. The rest, be it your compression socks with weather wicking technology or your inexplicable costly running wear, (eighties bucks for a tank top is too much, even if it is mesh), is in vogue. Ninety dollars for a pair of shoes is to be expected. Get what works but don’t overpay. Generally speaking, the uglier the shoe, the more expensive it’s probably going to be. Push vanity aside and get what works for you. Remember function over form.

I usually get my gear from a small running store off Randolph in St. Paul called Run N Fun.It’s pretty well known amongst runners in the metro area. It’s a crowded little building that somehow gets to feeling overcrowded even when you’re the only customer around.

There’s a dimly lit little room on the lower level that’s full of discounted running shoes. Somewhat organized by brand and size but not necessarily. As for the reason they’re discounted, who knows. I’ve been walking in circles trying to figure this very question out.

No matter what the shoes or other fancy accoutrements one might find, the first fifteen minutes of any run are the hardest. Once you get through that, you’re there. Go slow. Let your body wake up. Breathe as you need to breathe. Try to distract yourself from discomfort. Concentrate on cadence not on chaos. Let each step be denoted one beat.

I run in 4/4 time for the most part, 3/4 if I’m feeling fancy. Time signature is not important as long as it’s consistent. Remember not to judge yourself for where you’re at. There’s no point. You’re just going to be somewhere else eventually. Keep your mind on the beat and the timing will follow.

It’s all a process. It’s consistency that matters. It’s ignoring progress as well as regressions. Just run. Set a goal and just go. Don’t let yourself get in the way. Once a day, twice a week, whatever is doable is doable.

Remember running is natural. It’s in our DNA. We’ve been running ever since evolution brought us down from the trees and onto the ground. Away from Eden and prey for predators. Maybe we’re not running from hairy elephants or saber tooth tigers anymore. We’re too sophisticated for that. We have billionaires in space after all.

But we’re still running. Away from fear and fear of fears. We’re surrounded more than ever by distractions and neurotic overanalyzations. Driven mad by demands but uncomfortable during intermissions.

That’s why I run. It’s primitive. It’s a connection back to a time before time. It’s closeness to God in a natural state. Alone and quiet with nothing in front of you besides the trail ahead.