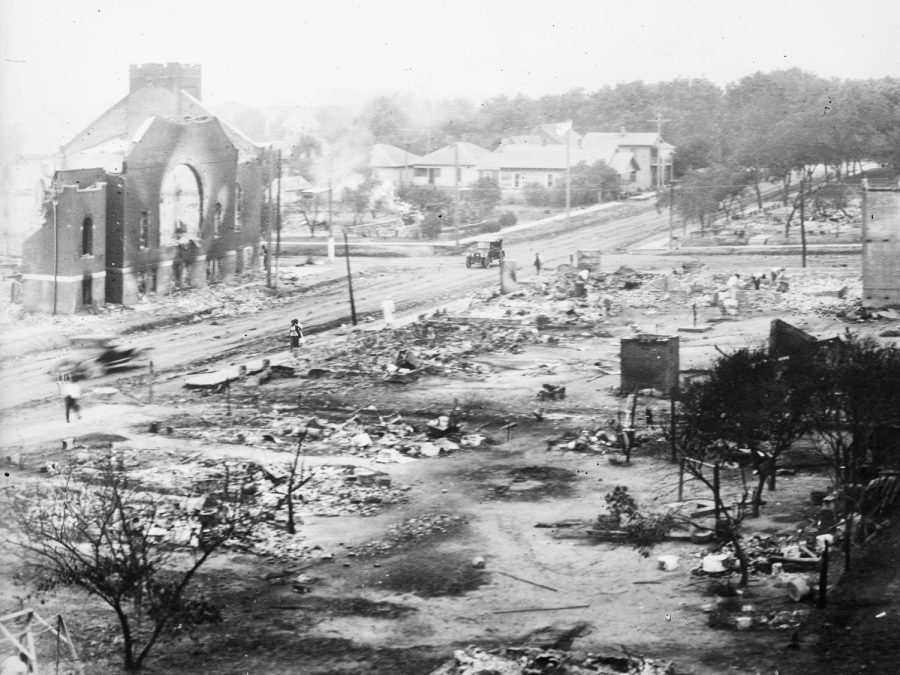 Buildings were destroyed in a massive fire during the Tulsa Race Massacre when a white mob attacked the Greenwood neighborhood, a prosperous Black community in Tulsa, Okla., in 1921. Eyewitnesses recalled the specter of men carrying torches through the streets to set fire to homes and businesses.

Have you ever heard of the Tulsa Race Massacre? If so, could you give an overview of the events, when it occurred, or what caused it to happen? I would assume no, because the Tulsa Race Massacre is rarely mentioned in school or history books and was even covered up by media and other news sources. It was not until the 50th anniversary passed that scholars started to dive deeper into the riot. To this day, the Tulsa Race Massacre is one of the worst incidents of racial violence in U.S. history yet remains one of the least known by society, despite the fact that white mobs killed hundreds of people and left thousands homeless.

The Tulsa Race Massacre occurred from May 31 to June 1, 1921, over the course of 18 hours. During this time, white mobs attacked homes, businesses, the residents of the Greenwood neighborhood in Tulsa, Oklahoma, and quite literally burned it to the ground. Greenwood was the home to most of the city’s 10,000 Black residents, which also included a flourishing business district many referred to as the Black Wall Street. The American Red Cross, who carried out relief to the area during the riots marked the death toll around 300, but the exact number is still unknown to this day. The people that did survive, lost everything, their homes, businesses, and livelihoods were demolished.

On May 30, 1921, Dick Rowland, an African American teenager got into an elevator with Sarah Page, a young white elevator operator. Shortly after entering the elevator, Page screamed and Rowland fled the scene, the police were called, and Rowland was arrested the next morning. Rumors of what happened in the elevator spread around the city, particularly in the white community, and there was even an article on the front page of the Tulsa Tribune, reporting that Page was sexually assaulted by Rowland. “As evening fell, an angry white mob was gathering outside the courthouse, demanding the sheriff hand over Rowland”. The sheriff refused and his men barricaded the top floor of the building in efforts to protect Rowland from the mobs. Later, about 25 armed Black men went to the courthouse to ask the officers if they could help to guard Rowland, but the sheriff turned them away. Rumors started going around that there was going to be a lynching, so the armed group of Black men returned to the courthouse with more people in their support, but they were met by a group of about 1,500 white men. Shortly following, chaos broke out and the Black men were outnumbered so they ultimately decided to retreat back to Greenwood.

After retreating to Greenwood, the chaos continued. Groups of white Tulsans were given weapons by city officials and countless acts of violence against the Black community took place including the shooting of an innocent Black man in a movie theater. Throughout the rest of the night of May 31st and most of June 1st, 35 blocks of homes, businesses, schools, hospitals, and churches in Greenwood District were completely destroyed, looted, and burned. The Governor at the time declared martial law and the National Guard was brought in to end the riots. Hours after martial law was declared and the riots ended, all charges against Rowland were dropped and the officers involved, ultimately concluded that Rowland probably just stumbled into Page or stepped on her foot. After the charges were dropped Rowland left Tulsa the next morning and never returned. Years later, “Black Tulsans worked to rebuild their ruined homes and businesses, segregation in the city only increased, and Oklahoma’s newly established branch of the KKK grew in strength”. Decades later there were no memories for the dead, or any efforts to commemorate the events that took place during the riots, but instead work was done to cover them up. In 2012, a bill which would require high schools to teach about the Tulsa Race Massacre failed to pass because people claimed schools were already teaching about it.

Although the situation with Rowland and Page on the elevator ultimately caused the Tulsa Race Massacre, other factors contributed to the severity of the devastation. Tulsa, Oklahoma was a prosperous city, with a lot of money coming in from the oil companies, but also a very segregated one. Tulsa had high crime rates and racial tensions following World War I, including the upturn of the Ku Klux Klan, the well known white supremacist group at the time. This upturn was another factor as they carried out countless acts of “racially motivated violence” and lynchings.

Moving forward, it is important to educate students and society about the wrongdoings of the Tulsa Race Massacre in order to prevent the repeating of events in history, and for people to understand the discrimination African American’s face every day. To this day, no one has been held accountable for the countless crimes committed during the riots, which has severely impacted Black Tulsans and the Black community today. Holding racists accountable for their actions is very important because racism is taught, and the only way society will see change is if people learn to change how they view issues in today’s world such as racism and discrimination. “After decades of silence, an enormous amount has been written in recent years about the Tulsa massacre and its aftermath…yet the state and local governments involved have failed to take action”. Meaningful steps need to be taken by Oklahoma governments in order to repair these devastating wrongdoings otherwise society will never change.

Check out this interactive piece from The New York Times

As a student at Century College you have full access to The New York Times. Whether you have an existing account or signing up for the first time, you will need to activate your Pass for fiscal year 2022 for free access to NYTimes.com.

While on campus visit:  https://ezmyaccount-nytimes-com.cenproxy.mnpals.net/grouppass

While off campus visit:  https://login.cenproxy.mnpals.net/login?url=https://ezmyaccount.nytimes.com/grouppass/redir/