The Text Message That Changed Everything 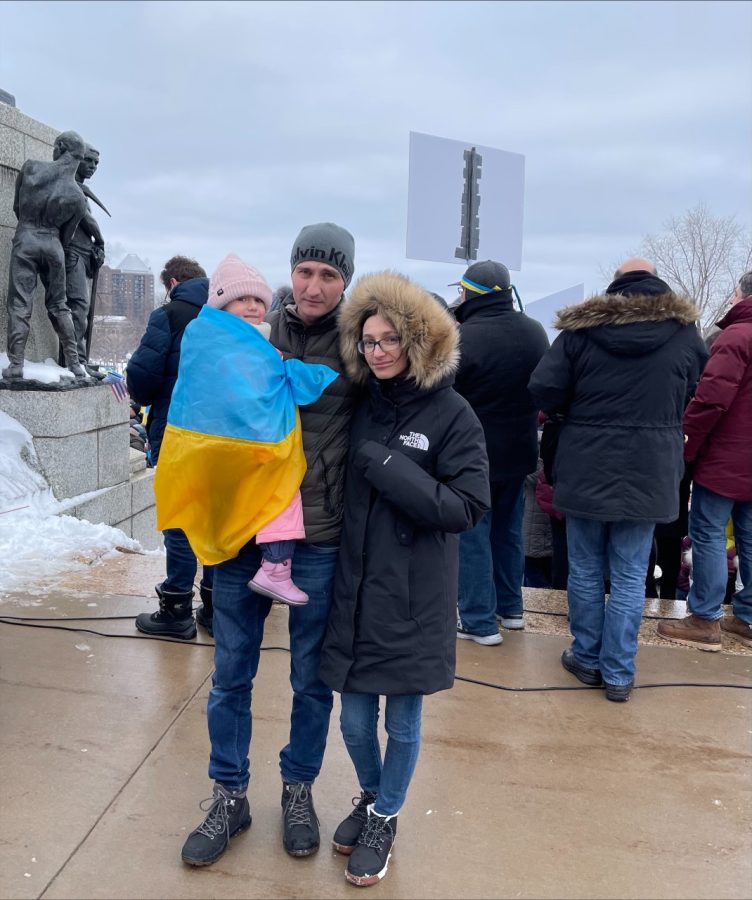 Liuda and her family in Minnesota attending the war on Ukraine awareness rally.

Recently, The Century Times had the opportunity to speak with Century nursing student Liudmyla Ruda, who grew up in Vinnytsia, Ukraine. Friends call her Liuda. She has lived in the United States for seven years.

Do you have family and friends in Ukraine now?

Everyone’s there: my family, my husband’s family, our friends, and our relatives.

It’s often. The first three days when this all started, I called them (my family) more than I ever had before. I was so scared and anxious. I didn’t go to work at the hospital because I couldn’t pull myself together. I am a nurse’s station technician (NST) at the U of M East Bank Medical Center in the cardiovascular intensive care unit.

It began for my family when my husband got a text message from a friend in the U.S. on February 23rd at 9:39 PM. The text said “it” started. My husband and I were confused, so we texted my husband’s friend back, asking him what he meant. He texted back, saying that the war had started, and a warehouse in Uman near my husband’s childhood home was bombed because it held military equipment.

We immediately called my husband’s mother to make sure they were okay. After several attempts, my mother-in-law picked up the phone. My father-in-law walks the family dog every morning between 4:00 and 5:00 AM. He was out of breath and reacting to seeing and hearing the bombs.

I started to shake after I heard the explosions over the phone. It was terrifying to listen to missiles, bombs, and explosions over the phone. We could hear the anxiety in my mother-in-law’s voice, but she denied it and said everything was OK. All I could do was shake. I did my best not to cry in front of my daughter. I had a lot of stress, and I was crying a lot. I didn’t go to work because I knew that I couldn’t help anyone else when I needed help.

“I would spend time with my daughter playing with her and trying to give her attention. I was reading to her, and all I could think about was my family in Vinnytsia. My heart was breaking.”

After that (a few days later), I pulled myself together and went back to my everyday life. I would spend time with my daughter playing with her and trying to give her attention. I was reading to her, and all I could think about was my family in Vinnytsia. My heart was breaking.

“I told my mom, war or no war, there are always exams.”

I also had exams. I told my mom, war or no war, there are always exams. I’m taking microbiology and math. It’s hard to study when you are distracted. I needed to concentrate and pay attention to what I had read, but it was hard because I was distracted by everything else that was going on. I was checking the news all the time. I would be reading a paragraph five times, and I couldn’t get it. I was trying hard not to fail my exams.

I usually have a good memory. Spring break helped with that because I didn’t have to worry about homework, and I could adjust to going back to work and living life for a few days.

I took the time to meet with a friend from Ukraine. We try and support each other. Finally, after about five days, I realized that there was war in my country, and despite that, I had to go to work. I had to keep going. I had to study.

Do you think the American networks are getting information about the war right?

I only watch the US news when I’m at work on my lunch break. I check Ukrainian news, and my friends send me photos/videos. I have friends in just about every city in Ukraine, and they send me videos of what’s going on near them. We use Telegram (an online messaging app) to communicate.

I think they are getting it right, and the only difference is that the information is coming much later to the U.S. because of the time change. (Kyiv is 8 hours ahead of Minnesota) I ask my friends how they are. How is everything going? I ask them how many soldiers are around, how many were killed or what they were doing. Whatever is happening, we communicate often. They tell us about air alerts or sirens going on in their area, which cities it’s happening. If it’s happening near my parents or other family members, I text them or call them and ask them if they’re okay.

So American news is pretty much a secondary source for you?

Yes, it is because I have a good idea of what’s going on between talking to my family and friends or seeing what others have posted on social media. I don’t have much time between work, the baby, and homework to watch TV or even the news at home. This is the most I have watched the news in seven years.

No, it’s more like Viber, Zoom, or Skype. People created a channel to get updates about the war comments or videos. We will share and say, “Hey, we will get together at this church if you want to come by and help if you can.” You can chat with other people, or you can just follow the group on the app and read their information to get updates. Different groups and chats are going on all the time.

Regarding what little American news you have seen, is there any aspect we’re getting wrong?

What I have seen is right, but there might be some misinformation. For example, one of my coworkers said to me, “I see what’s happening in your country. It’s scary, and it’s not supposed to be this way. Many people are dying.” Then she says to me: “This is not all the truth, right?”

I was shocked to hear her say that. I asked her, “What do you mean?”

She said, “Not as many people are dying as they’re saying. They’re making it up. The bombing of the hospital in Kyiv, they are making it up, right?”

Many Russians are saying that the bombing of the hospital in Mariupol is fake. Russians are claiming there were no people or doctors inside. Russians say they bombed it only because neo-Nazis were there, and Ukrainians are making it up. My coworker said the same thing. We are faking news. I feel like she was watching some pro-Russian news. I don’t know how we can fake the death of people. I have friends who send me videos to prove what’s going on. My coworker somehow saw that not all the information she sees is true. I was shocked; I didn’t know what to say.

“We have had sirens nonstop for so long, and I’m scared.”

Why would she even say that to me? I have everyone there. I ask friends how they are, and they tell me, “It’s quiet today, but I’m scared. We are in the bomb shelter. We have had sirens nonstop for so long, And I’m scared.” Every time I text my friend, she says it’s scary, and I’m scared. She sends me videos of huge explosions close to where she is. She doesn’t live in Kyiv, but she works there. She tried to leave for more than eight days, but she couldn’t.There was no food because the stores were destroyed.

“There was no food because the stores were destroyed.”

Russia tells its people that it is helping Ukraine. In truth, they are not helping us.

Do you have contingency plans to get your family and your husband’s family out of Ukraine?

I would like them to leave, but they don’t want to. My dad was in the army, and he could still get called up to fight. My mother insists she will not leave with my younger brother. In my husband’s family, his older brother could get called up anytime to fight, so he can’t leave either. No one wants to go.

Do you think you’ll ever return home?

I’d like to go home but probably not anytime soon because the airport is destroyed. I would need to cross the border between Poland and Ukraine to get home. My family tells me I am safer where I am now. I hope that we will win this war and that Ukrainians can begin to rebuild.

What made you decide to talk to me today?

To get out information and encourage people to help Ukrainians. We are not the ones who started it, but we really want to end it. I’ve been going to many rallies. The pictures I shared with you show my family and me. Those were taken at the capital rally in Saint Paul. I donate money when I can. I have communicated with Saint Jude Children’s Research Hospital to volunteer to help pediatric cancer patients. Still, I don’t know they’ll call me because I know they’ll call doctors first, and many volunteers want to help. I’m not even a nurse yet. I want to help in any way that I can.

I have cried so much that I feel like I don’t have any tears left.

I have cried so much that I feel like I don’t have any tears left. At least now I’m to a point where I can almost talk about it without crying. I cry from time to time, but it’s not like it was early on. My people (Ukrainians) are nice, peaceful people who need help. Any support that people can provide will be appreciated. When I see women and children getting hurt or killed, I feel this has to stop.

Now with Ukraine, you wonder what country will be next. What if Putin decides to take part of Germany or Poland or some other country? No one deserves this. It shouldn’t have gone this far. How can we have this happen in the 21st century? This shouldn’t be happening. I’m speechless.

One of my patient’s family members came to me and said, “Liuda, I want to help your family. Can I write you a check?” I let him know that I can’t accept anything from him directly, but I gave him the names of organizations he could donate to and the links to donate money or other things. These gestures almost made me cry. So many nice people want to help.

What can we do to help?

The biggest things are humanitarian aid, military and medical supplies. I have a couple of websites and the address to a Ukrainian Orthodox Church in Arden Hills to share. The donations they currently have will be going to Chicago and shipped to the Polish-Ukrainian border for distribution to where they are needed.

Opportunities to support the people of Ukraine: 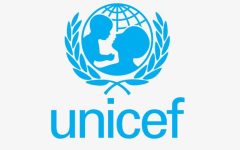 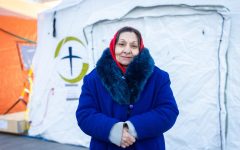 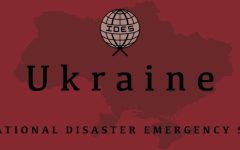 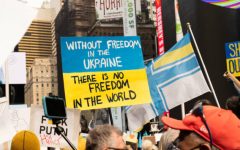