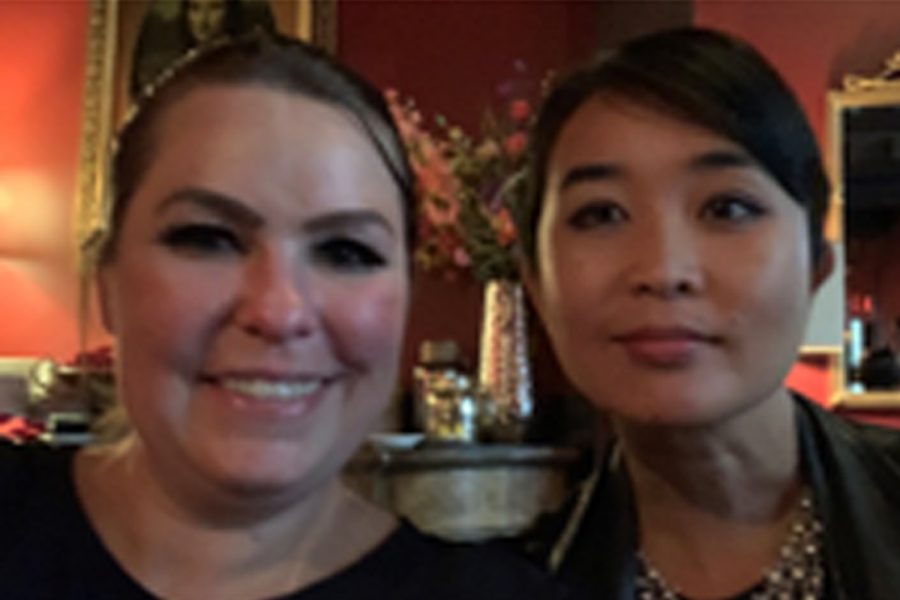 The American news channels do not report the anguish that is placed on the refugees since September 11, 2001, but report on the sadness that happened that day and the unity that came the day after. I happened to have a great deal to do with Thi Bui’s speech on September 12th, 2019. My English Composition 1 and 2 instructor, Yanmei Jiang, had collected a few students to help with the logistics on campus. Davis Leaf, a Century Times Editor, and I had to tell students who we are and thank Bui for coming to speak at Century and the sponsors for the event. I attended her first speech at the Hanifl Performing Arts Center that morning, got my book signed, and proceeded to help with the seating and the thank you speech. What was super fantastic is that I was invited to go to dinner with Bui and Century College’s President, Angelia Millender, at Rudy’s Redeye Grille that night and I sat next to Bui. Her speech touched on her comic works and the horrors that migrants, asylum seekers, refugees, and some travelers had experienced since the 9/11 attacks, which was not something Americans understand.

She spoke about some of the pro bona work she does on current affairs and pointed out  her work on the circumstances for different refugees; the first one was Andy Trinh, a detainee who is locked in a 10′ x 6′ cell for 22 hours a day at the worst immigration detention center. His other two hours were spent in a larger area called the day room to socialize. He was never told why he was there, but knew he spent some time in the California county jail for marijuana in 2015, which is now legal in California. He already had finished his sentence for the offense, but was turned over to be held for deportation without a release date nor has Vietnam issued his papers to be deported. Not only was his existence one of torture, his family felt the pain. He did see his release, but it was not as though he was unaffected from the time he spent in the cell. The comic did not stop there, another story traced in her comic was that of Dy Nguyen and Ngoc Hoang.

Dy Nguyen and Ngoc Hoang had families that would be split up because of the orders of removals if their countries complied with the pressures from the United States government. Dy’s wife and daughter, Chari, were without him when he was a detainee which made them fear that his daughter would grow up without a father like he did. He was held in a detention center like Trinh was, but was released less than a year later. However, he still has an order of removal and could be detained again or deported at any time. Ngoc Hoang acted out, getting into trouble, after his father was imprisoned and his eldest brother escaped only to be taken from him in a car accident a few years after they were reunited. Now he has a family with four teenage children, but was detained after a trip to bury his grandmother in Vietnam, their last relative in their mother country. His family just wants them all to be together in the United States, be a good father, and provide for his family. Later in the comic, it was stated that President Trump has been pressuring governments to take back thousands of refugees, but how will that change the way the South Vietnamese were treated in their own country? It’s not just the Vietnamese that face this type of treatment. Any refugee from any country who is up for deportation already escaped horrible situations that they deemed worthy to flee. Americans are alright with this?

My one question to the American people is why has America’s worst day turned us into heartless people who believe that inflicting these traumas on others is justified? Not only are we treating refugees like criminals without crimes but after 9/11, travel bans separated families from each other for days after. Now, we hold people in cages for crossing the border, separating children from their parents, and spending millions of dollars on a wall only for them to find a way around it; a more perilous way around. It’s life or death for people where they come from, so much so that they are willing to risk their lives. One thing resonates that thought, Bui showed us the hardest picture for her to draw and swore she would never draw a picture like that again. It was of a Syrian boy, Alyan Kurdi, face down on the shores of Kos, Greece after fleeing from his home country. This is happening all over the world and we are denying them safety and security of their lives.  Additionally, I posted the comic on Facebook and as a comment on other 9/11 posts and received one response. Was that all I would get?

It wasn’t for nothing. My comment in rebuttal to that response was something that received more attention. The comment asked if I wanted to pay for them, to find them a job, and that there were so many not in a good state in their lives who are already citizens. My rebuttal was that the comic wasn’t about not letting them in but that they were already here long before 9/11 and our treatment of them got worse. I told him that our tax dollars were already paying for it and how would he like it spent: to imprison them or help them get their lives together. I got two likes, which is good considering so many people did not even want to hear the things I was saying since all the posts about 9/11 and 9/12 were fresh in their minds. I think my next post will contain the picture of Alyan Kurdi. The ignorance I’ve seen in the people on my Facebook is what I see in Americans everywhere; they don’t want to relate to the people they side against.

Her comic pro bono works showing the circumstances of Andy Trinh, Dy Nguyen, and Ngoc Hoang do not hold weight with the United States citizens. Social media along with the news media does not address this issue. Some magazines, newspapers, and internet media sites have articles about this issue, but it does not seem to relate to people and is not being read. How could Americans be so heartless? Is it that Americans lack empathy? I think they might; personally, having a life of trauma has not been very well received by people who have not suffered a long-term dire situation. I relate to these refugees because I have been in a situation that I wanted to flee so badly I begged to die but could not accomplish – 35 years filled with every kind of ab use. I want to see it as fear – people can get over fear – but you cannot teach people empathy after they are an adult. By then, you either have it or you don’ t. Finally, I saw an end to the abuse and hope to high heaven that they get a chance to see the end of their pain.