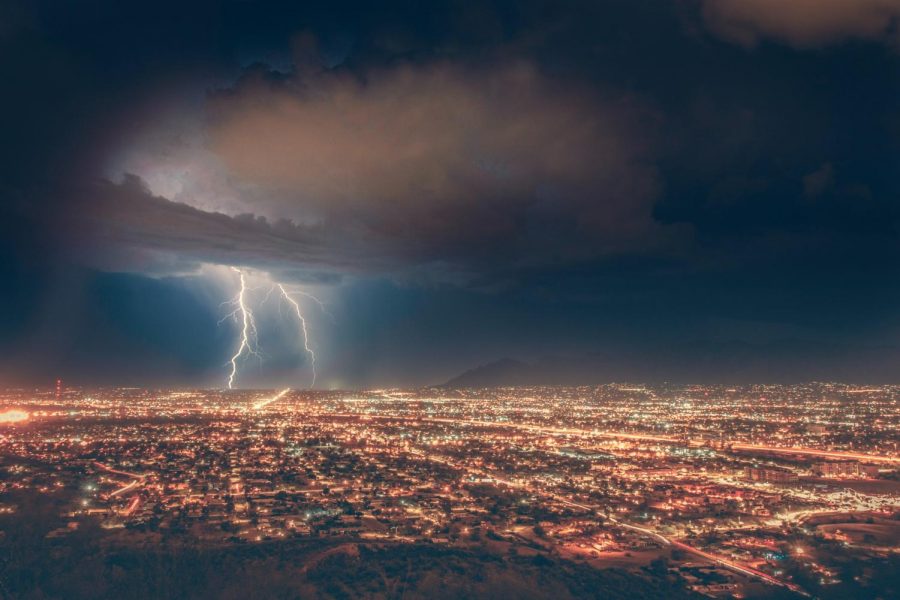 The wind brings people to curl into their coats. Feet tap on the pavement as engines hum, police sirens wail. It’s bumper to bumper. Horns of impatience pierce the air. The throngs of people exiting buildings mingle in an incredulous manner. Some have places to be, others don’t. This is a normal day for them. Their last one.

The gray clouds move fast in the sky, darkening the sun and shadowing the ground. A few people look up. It’s always strange when that happens, isn’t it? But this time they stop and stare. The clouds completely stop. The sun is a distant haze in the sky and the city is now dark.

A gust of wind blows down the street, it’s so strong you can almost see it. It whistles in your ear as you catch yourself from a stumble. It carries a light mist. The clouds flash white, lighting the city for one last moment before raucous thunder shakes the earth so hard the buildings go dark. Cars sputter and die. There are distant screams and utterances of confusion. People pull out their cell phones to no avail; no signal. Some wonder if maybe the sirens aren’t just a test.

I am just the messenger. A harbinger, serving only for her. I don’t wish you any harm… but they do.

The screams are louder now. I watch as humanity flees from the animals now stalking the streets. Hooves and paws clap against the asphalt. Wings flitter and ghastly caws make eardrums bleed. A gray wolf snarls, teeth bared to reveal fresh sinew between the fangs. A buck’s antlers drip with a hunter’s blood. Crows dive, talons scalping people for nests and pecking out gooey eyes.

Mother says this is stolen land. She says the grass you mow was born of blood and tears. She says you live on lies, betrayal, broken promises. Greed is a sin for a reason, she says.

Mother is tired of you. Bury your palms in her soil; feel her weak heartbeat. Breathe in deep; feel the sickness spread from her lungs to yours. Keep calm as the sod squeezes your hands and won’t let go. The fear you feel now is how she felt when you first refused to respect her. This is not a one-sided argument.

Now, sit and listen to me. I remember, long ago, when I was alone with Mother. I’d sit by the lake, sunlight dancing on my skin with feet tucked under the warm sand. I’d listen to the birds’ chirp and the buzz of the cicadas. I’d hear the rabbits thump and squirrels chitter. The lake’s waves lap against the sand.

Those waves you see now are not the same. They are tall and acidic, ready to swallow you. Watch the blood mix with it. Droplets fall on your cheeks. Humanity never had a chance.

The sirens echo through the red, barren streets.