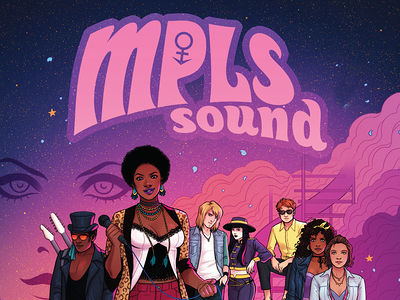 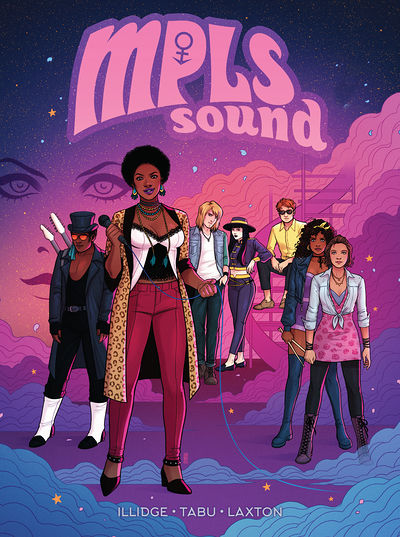 Marking the fifth anniversary of Prince’s death, the graphic novel publishers Humanoids in conjunction with Simon & Schuster have released a graphic novel called MPLS Sound. It is a fictional story set in the early ‘80s and is built around a character named Theresa Booker.
The seed is planted when Theresa and her best friend Izzie go to a Prince concert at Sam’s. (Sam’s does not become First Avenue until New Year’s Eve of 1981.) Of course, Theresa somehow ends up in front of the stage and is mesmerized by Prince’s performance.
Theresa decides she wants to start a band. She asks Izzie and her brother Ellis to join, along with a few others. They call themselves Star Child. Eventually, the band does grab the attention of Prince, but Theresa struggles with the thought of accepting his help.
The cameo appearances in MPLS Sound are a nod to the early ‘80s Minneapolis music scene. Lipps Inc. (Funky Town) and Vanity 6 make an appearance. Alexander O’Neill teaches Theresa how to make the best use of her singing voice.
Along the way, vague visual references to the Minneapolis skyline, the White Castle on Lake Street, and Mickey’s Diner in St. Paul might jog a few memories for readers. The colors are deep and mesmerizing with plenty of purple, of course. Visually, it’s beautiful. There’s one problem: no music.
Yes, I know we’re talking about a comic book. I’m sorry, but MPLS Sound needs audio to make it complete. This feels like a buffet of wax fruit! I understand that based on the talent of the people that put it together, they are the best in their field. I understand this was a labor of love for them because like many of us, they too are Prince fans. I respect that, and I hope one day they can take that love a step further.
It’s hard to connect to a fictional musician without hearing their music. I would love to see the same team continue to work on this and invite some animators to make it more of a performance piece.
Please don’t get ahead of me and think I’m hinting towards a Pixar Soul type vibe. No way! Nothing that polished could do the Minneapolis sound justice. I believe the creative group behind this is capable of so much more. I’d love to see what they could do with Prince concert footage or visually reworking Purple Rain.
The group includes Joseph Illidge, lead writer. He has spent his entire career writing and editing for Marvel and DC comics. He was the first black editor of Batman comics. Illidge is also the co-founder of Verge Entertainment. He also has live-action credits with the shows Arrow and Gotham.
Hannibal Tabu is known for his own graphic novel writing in Project Wildfire. Tabu also has writing credits in MPLS Sound. Tabu began his writing career at the Los Angeles Sentinel. The LA Sentinel is the oldest black owned newspaper (circa 1933). Tabu was chosen as the 2018-2019 DCA Cultural Trailblazer by the city of Los Angeles Department of Cultural Affairs.
Meredith Laxton illustrates MPLS Sound. This is her first full-length graphic novel. She earned her MFA at Savannah College of Art and design. In addition to graphic novels, Laxton also works in video games.
Find your copy of MPLS Sound at your favorite comic bookstore or on Kindle.